Discounted rooms are SOLD OUT!

If you are an individual attendee, register here.

Sponsor Registrations: Use this link to register if you are a 2015 NAEM Sponsor - https://www.condorregistration.net/NAEM/sponsor.php

Because of recent changes to security protocols regarding web commerce and online credit card processing, this registration form requires the latest versions of Internet Explorer (11), Mozilla Firefox, Google Chrome, or Apple's Safari. If you have problems accessing the form, please check and see what web browser you are using and ensure that you have downloaded the latest version. If you have problems using the form, please email CONDOR Registration Sevices at naem@condorregistration.net or call at (256) 852-4490. 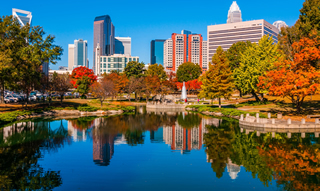 Charlotte is the largest city in North Carolina and the second largest city in the Southeastern United States. The city is a major U.S. financial center, with both Bank of America and Wells Fargo's East Coast operations headquartered in the city. Nicknamed the Queen City, Charlotte and its resident county received its name in honor of Charlotte of Mecklenburg-Strelitz, who had become queen consort of Great Britain the year before the city's founding. A second nickname derives from the American Revolutionary War, when British commander General Cornwallis occupied the city but was driven out by hostile residents, prompting him to write that Charlotte was "a hornet's nest of rebellion", leading to the nickname The Hornet's Nest.

The closest airport to The Westin Charlotte is the Charlotte Douglas International Airport (CLT). The airport is about 6 miles (10 minutes) away from the conference location.

Transportation from the airport to the Westin Hotel

Most taxi companies in Charlotte will take you form the airport to the hotel for about $25.